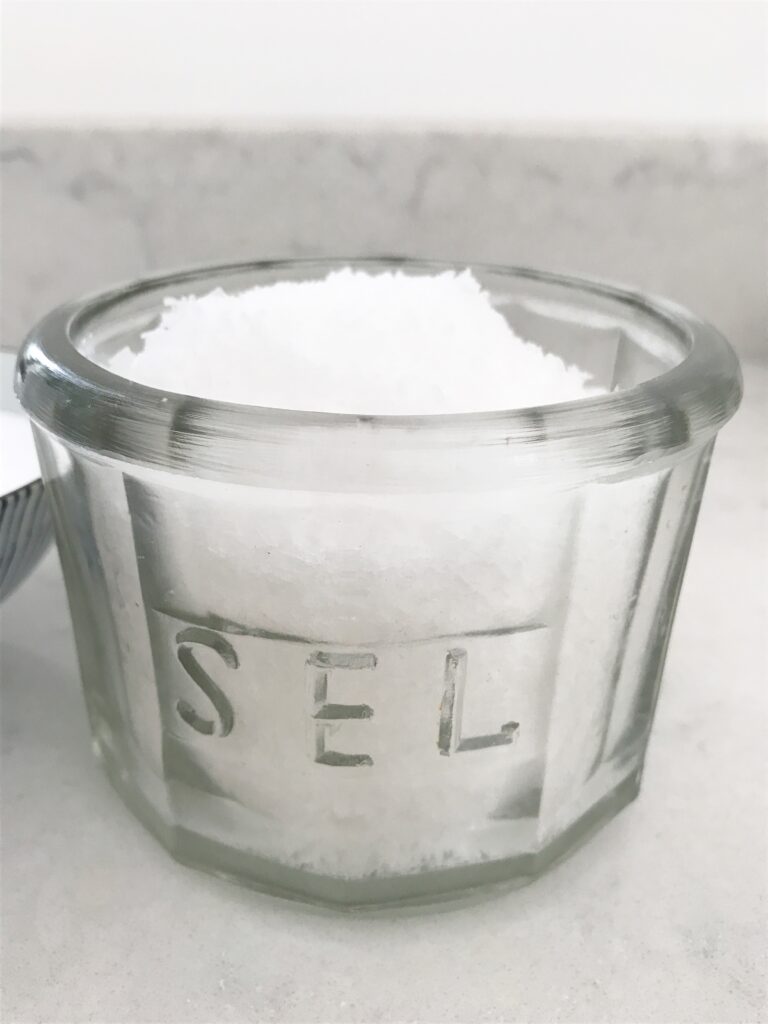 I recently cooked with children at my sons’ school and was blown away at how many children said they didn’t like tomatoes. You know that kills me. Anyway, I had them try a sliced baby tomato with a sprinkle of sea salt and the look in their eyes was magical. They gobbled them up. Food just tastes better with a little salt.

I can guarantee that every class, no matter where, someone will ask about salt. Not only what type to use – sea salt, always, fine grain for cooking anything liquid or Maldon flakes for finishing a dish and roasting – but also if it is healthy to use salt in cooking.

What I’ve learned from speaking to doctor friends, is that if you are not eating processed foods, and you don’t have a medical condition that limits salt, it is absolutely fine to add salt to your cooking. If you do eat a lot of processed food, and most people do, read on for how to move over to cooking for yourself.

Adults are recommended to have no more than 6 grams of salt per day – this is around 1 teaspoon of fine grain salt or 3 teaspoons of Maldon sea salt flakes.

Current UK guidelines for salt consumption in children are:

Confusingly packaged food is often labelled with sodium instead of salt. The recommended amount of sodium is 2g per day (most commonly and confusingly labelled as 2000mg). The reason for the different names is that chemically, salt is made up of sodium and chloride – the only part of the salt that we’re told to watch is the sodium part.

So many parents avoid adding salt to their cooking. Understandably. However, like most adults, most children get their salt from processed food. So, again, if children aren’t eating much processed food, it is fine to make their home-cooked food taste delicious with a little bit of salt. I’m convinced that a lot of the fussy eating we see now comes from children’s food being so bland – since we all got scared to add salt to the food we cook.

To put the amount of salt we feed children in context, a pinch of sea salt (the amount I’d usually season with) is around 0.3g, less than 10% of a 5 year old’s recommended amount. A pack of Pom Bears or a serving of Pirate’s Booty has the same amount of salt. A big slice of pizza takes most children over their daily amount. If we ditch the packaged foods, we could give ourselves really delicious, well-seasoned food without hitting the daily recommended amount.

See what salt does for yourself

Try tasting tomatoes, potatoes or cucumber, with and without a pinch of sea salt and tell me what you think. Take it a step further, try a square of chocolate or a ball of chocolate ice cream with a sprinkle of sea salt flakes and see how much more balanced the flavour is. That’s the reason we put salt in baking – to balance out the sugar.

I love a salty french fry or a slice of pizza as much as everyone. But we don’t have them every day. We get our fix from homemade versions like these oven baked fries and these black bean burgers. If you are a tortilla chip fiend, try making my tortilla chips.

Aside from fast food, bought soups, sauces and ready meals are usually the worst culprits for salt. Make your own soup or pasta sauce by following one of my easy recipes and freeze it in small servings so you can grab one to easily defrost. Cook dinner from scratch or bulk cook and make your own meals for the freezer. Not only will they be lower in salt, they’ll have much better quality ingredients and nutrition than bought meals.