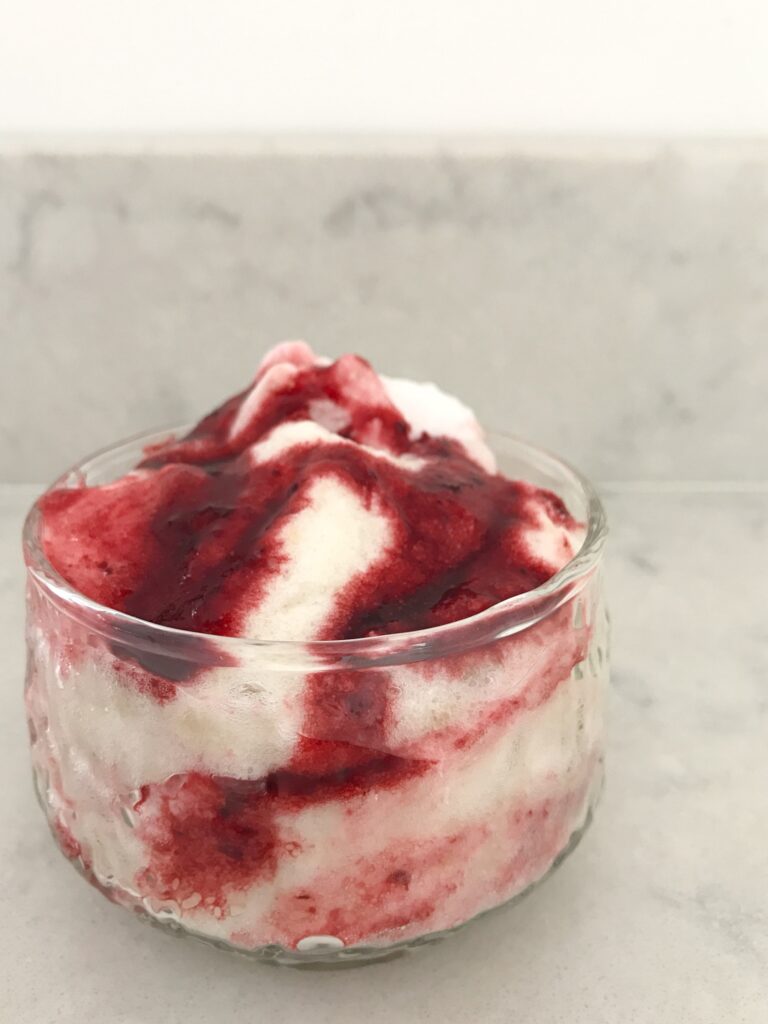 Faced with piles of blackberries from a recent walk and a bag of Bramley cooking apples from my Mum’s tree, I felt myself lean towards my default blackberry and apple crumble. But then I remembered the cloud-eating joy of apple snow and wondered if it was still as good as I remembered. It was. Better in fact as I added a blackberry ripple.

Apple snow is made by folding whipped egg whites with stewed apple/apple sauce. That’s it. I’ve added a blackberry sauce but you can make it without. You could even cheat and use a jar of apple sauce if you don’t want to cook your own apples. This is an old fashioned recipe and is so delightful that I think it deserves our attention again. It is so easy to make and also works for a whole host of modern dietary requirements since it is dairy, gluten and refined sugar free. But don’t let that put you off if you eat everything. It is one of the desserts you can serve up every night of the week and not feel like you’ve ODd on sugar. You could even have it for breakfast.

There are no precise measurements in the guide below. Don’t let that stress you out, just know that you can freestyle this a bit to suit your tastebuds and whatever number of people you’re feeding.

If you are a confident cook, this recipe doesn’t need much explaining, but if you’re not sure how to stew apples, make a berry sauce or whip egg whites then scroll down and I’ve explained each part in detail.

Make the apple sauce (or cheat)

Use Bramley apples or cooking apples rather than dessert/eating apples as they cook into a fluffier sauce. Cooking apples are trickier to find in the US so you could cook regular dessert apples and then blend them to make a smoother sauce.

Peel and cook as many apples as you can face in one go as having a stash of apple sauce in the freezer is a total joy. Use the sauce with roast pork or as a crumble or pie filling. We have it with yoghurt or oats for breakfast too.

You’ll need a couple of cups of the finished sauce for a four people serving of this dessert so you’d need to use around four fist sized cooking apples.

Keep the liquid in a jar in the fridge until needed. If you have leftover from this recipe you can use it to mix with Gin, soda and lemon juice or instead of kir with champagne. Dreamy.

Separate an egg and whisk the egg whites until they are stiff. I use my electric whisk for this. Make sure the whisk and bowl are free of any grease otherwise the egg white won’t fluff up.