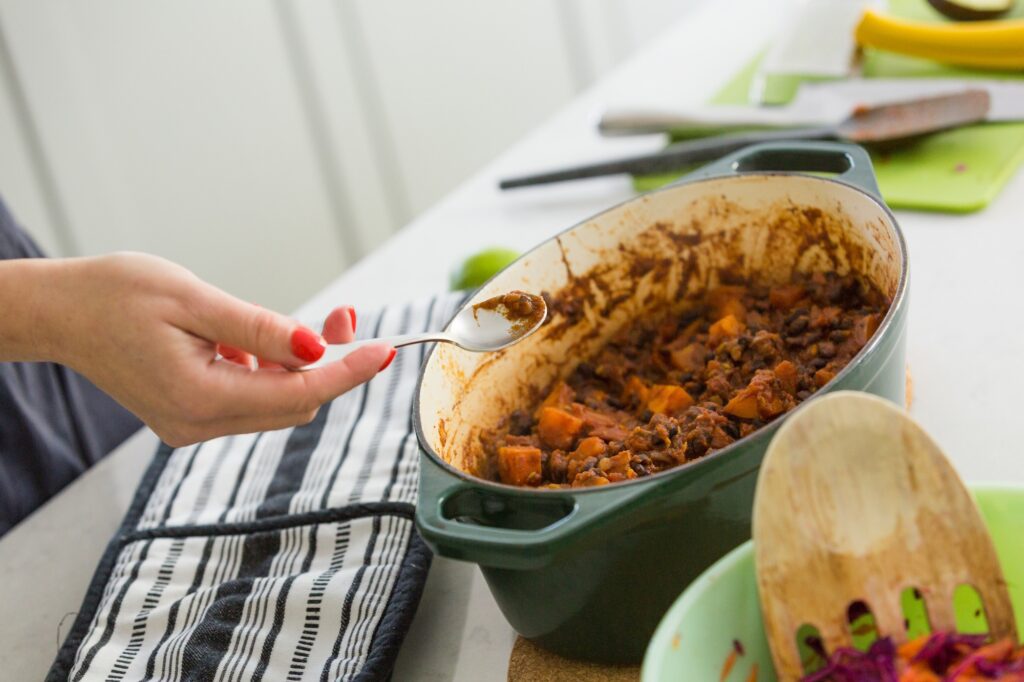 throw in the oven meals

These recipes are some of my favourite throw in the oven and leave them meals. Some of them take a little while to prepare but once in the pan, can be put (or thrown) in the oven and left to their own devices. That way you can go off and deal with the rest of what life is throwing you.

I’m really late to the slow cooker/crockpot party and know how much many of you rely on them for meals like this. I have just bitten the bullet and bought one so will share recipes that use it as soon as I’ve had a play. The main thing to remember when adapting recipes for a slow cooker is to still brown things first and to use less liquid than an oven or hob-cooked recipe. The Spanish chicken and the beans recipes below will be great in a slow cooker if you have one. Let me know how you get on.

This recipe is the easiest ever and always gets so many comments when I share it on social media. To make it you throw it all in a ceramic lasagna dish and into the oven (if you have the time, children can chop up the greens and sausages, then drizzle over the oil), then put in a hot oven for 30-40 minutes. Add some red wine vinegar to lift the finished dish and watch as it is devoured. Here’s the recipe.

When people ask me what my go-to mid-week meals are, I invariably mention my love of a tray bake. Cooking in this way is hands-off and delicious. Spend the time and money on good sausages (made from happily raised animals please) and a lot of the flavour work is done for you. In the recipe I share the various combinations of vegetables I use throughout the year, but this version uses a decidedly autumnal sage and squash combo. The apple salad I make with this provides a nice dose of acid freshness to balance things out – it may sound odd but it is utterly transformative and has won everyone over I’ve made it for. Here’s the recipe.

A pot of baked beans

Recipes like this are fab because they’re easy and inexpensive and form the base of lots of different meals. This can be served with jacket potatoes and slaw or turned into a cassoulet. It can be cooked in the oven, low and slow for a couple of hours. Here’s the recipe.

This Spanish chicken is the kind of dish I grew up eating. We often had braised or roasted one-pan dishes that my Mum could spend a few minutes pulling together then leave to cook in the oven while she went on with all the other things she had to do. This type of meal also tastes better when eaten a day or two after it is made – so it is a gift to anyone who doesn’t have time to cook from scratch every night. You can also take it in all sorts of flavour directions once you get the technique down. Here’s the recipe.

One pan fragrant roast chicken with crunchy chickpeas and vegetables

My students love a good one pan, throw it in the oven dinner so I think you’ll love this. And because I can’t stop myself from sharing, I’ve given you four flavour combinations and finishing touches that will take the exact same recipe in a totally different direction. You can also switch the chicken for salmon or lamb once you’ve cracked the recipe. Here’s the recipe